There exists a Teapot in orbit around the Sun


I    FOUNDATION OF TEAISM

I
FOUNDATION OF TEAISM
This monoteaistic system had its beginning after the existence of the Teapot had been revealed to the Honorable Octavius in a moment of cosmic clarity. The overwhelming certainty of the revelation motivated Octavius to record the truth contained within it, and thus Teaism was founded. This truth has been prophecised, by Bertrand Russell although the message had been still vaguely understood until its formalisation by Octavius. Presently Teaism has a wide following, and its enlightening content is feverously studied by numerous inspired teaologists.

II
DOGMAS OF TEAISM
I    There exists a Teapot in orbit around the Sun.
II   In addition there exists the 'Divine 8 piece Tea set', or just 'The Jolly Good Octave', which consists of the Teapot, 3 cups, 3 saucers and tray. The Teapot cannot be observed in principle, however its other manifestations which are part of the "Jolly Good Octave" appear regularly to the open-hearted folk in the form of flying saucers, often in formations of three which confirms the transcendental structure of the octave.
III  Teatime is the time when Tea is consumed.
IV  The underlying substance of everything is Tea.
V   The essence of the Teapot is Tea.
As a consequence, all Teaists augment the usual set of astrological symbols of celestial bodies as depicted below. This updated chart is more general by virtue of completeness. To distinguish it from its incomplete predecessors it carries the name of The complete chart of astrological symbols of celestial bodies.

THE COMPLETE CHART OF ASTROLOGICAL SYMBOLS OF CELESTIAL BODIES 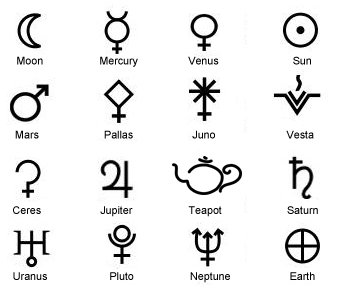 III
POSTULATES
It follows from the first dogma that there will be two special alignments of the Earth, the Sun and the Teapot; first being a conjunction, and the second an opposition. Also since, by the second dogma, the Teapot can never be observed the dates and time of those alignments will remain unknown. However they will necessarily take place. Hence arbitrary dates for their celebration have been chosen: The conjunction (whether it is a major or minor one remains unknown) shall be called "The great NecessiTEA" and will be celebrated each year on the 8th of August. The opposition shall be called "The golden ImperaTEAve" and shall be celebrated every year on the 21st of March.

IV
PILLARS OF TEAISM
Tea shall be consumed each day at Teatime. The first day of each month is a Tea Party day.

V
BOOK OF RITES
The strength of tea consumed has a sacred relationship to the time of day. In other words strongest tea is consumed at midday and negligible strength at midnight. It follows that consumption of tea is forbidden at midnight.Using teabags is a profanation of the sacred substance. A Tea Party commemorates the origin of Teaism, and is intended to stimulate reflection on its doctrine. This is done over a cup or two of the sacred drink. Biscuits are optional. By the "The Golden Mean Ruling" a liberal use of milk, sugar, honey or any other additives is permitted with Tea only for non ritualistic purposes i.e. no additives shall be mixed with the sacred brew during Tea Party days.
Individuals who choose not to follow the self evident and true path of Teaism are aTeaists. Aside from their limited right to actively participate in the Teaocracy, all care should be taken in healing their their repugnant and inferior cognitive condition.

VI
GENERAL TEAOLOGY
Current Teaological inquiry focuses primarily onsolving the conundrum ever since the existence of the Teapot was revealed to its founder the Honorable Octavius; does Teatime determine the time at which Tea is to be consumed, or is it the temporarily arbitrary act of Tea consumption that determines Teatime? Some progress has recently occured on that front, and it seems that the arrow of Tea i.e. the direction of the flow of Tea may be a key step in solving this conundrum.
Recent Teaological analysis carried out by the "Ponderites" mendicant order has questioned the necessity of both "The great NecessiTea" conjunction and "The golden ImperaTeave" opposition, by pointing out that those alignments would be necessary only if one assumes that Teapot and Earth's orbits are in the same plane.This may require an amendment to the Dogma which explicitly includes that assumption i.e. gives it a status of an axiom. Alternatively, it has been suggested, the necessary conjunction and opposition should be substituted by two truly necessary positions: the closest Earth-Teapot passage, and the most distand Earth-Teapot passage.

VII
ANNALES OF THE TEAOCRACY
Also, strong arguments suggest, that in order to provide the best conditions for Teaism to flourish and preserve the integriTea of moraliTea, its members should strive to establish a Teaocracy. Once established, all care should be taken to maintain it. In a Teaocracy, aTeaists will be free to voice their opinion, but their rights related to participation in the legislative procedures of the Teaocracy will be limited.

VII
TEAOGONY
In the beginning was The Recipe, a purely formal and transcendental tendency to make Tea. An inevitable probability maximalization of The Recipe led to its manifestation. This manifestation resulted in the Big Boil. The Big Boil gave birth to to the Great Brew which appears to be still expanding. At largest observable scales the Great Brew is both isotopic and homogenous. Such homogeneity had baffled Teaologists for some time until a revelation concerning the initial period of Infusion dawned on one of them. This Infusion was a period of rapid expansion of the fabric of existence which initiated the Big Boil and lasted less than one could say "Bob's your uncle".The Big Boil did not occur at some point IN the brew or time. The Great Brew creates its own space and time as it expands. Hence asking what was before the Big Boil is meaningless. This single origin of the Great Brew from the manifest singularitea of The Recipe, justifies a name often used interchangeably with "The Great Brew"; The Unitea. The former name places emphasis on the dynamical and formal aspects of being whereas the latter on its substance and essence.

VIII
BOOK OF NUMBERS
The number 8 has a mystical and fundamental significance in Teaism.

TEAISM (disambiguation) Teaism is a belief/thought system initiated by the revelation of The Teapot to the Honorable Octavius. It may also refer to:
A term coined by Okakura Kakuzo in his The Book of Tea.

Email ThisBlogThis!Share to TwitterShare to FacebookShare to Pinterest
Labels: Satire

This seizure was not complete. There are two missing points in you essay that are very important in teaism:
1. The Mad Hatter's discovery (his contribution to the development of Alice's perception of reality) - the actual discovery of 11-th dimension.
2. No mention of relation between the time of day and the strength of the consumed tea.

Ah, yes of course! Thanks for pointing that out, when the project will be finalized I'll certainly mention those undisputed facts.

Realistically though I'll try avoiding reference to fictional characters - -the farce needs to be subtle.

The second point however is noted and "in" so to speak - I'll make the addition right away - thanks for the imput!

Just a quick reflection - that the Mad Hatter could be equally fictional as the orbiting teapot or say the graviton... Actually The Mad Hatter was mentioned much earlier than the teapot or graviton so he is more plausible.

Human beings will never (except after their deaths) be able to dismiss the faith (eg. belief in the existence of graviton, teapot or G-O-D or the expectancy of waking up tomorrow).

I'm in! What does the Initiation Rite look like?

Bartek,
You accept the necessary validity of the Dogmas and Postulates of Teaism...while having a cup of tea.

(I haven't thought about the initiation ritual before your question, so you have already had a "collateral contribution" to the conceptual framework of Teaism)

Also you have to accept the invitation, which I sent you - it's under the "zaproszenia", or "requests/invitations" link on the right hand side of your facebook homepage. You do have a facebok account? Initial recruitment is presently limited to that community i.e. a facebook group, but a website will emerge soon.

Conversely, if a couple of friends have a tea, just choose the big fellow of the water nearly rose penghu-glance, it does not force everyone to go not, if so, the guarantee within three months, you will have three friends become two, two become isolated, only a Cheap Ceramic Teapotstoast to invite the moon, the shadow into three peopleAuthentic Purple Clay Teapot