The Way of a Saint: Beatification of John Paul II

Last Sunday  Karol Wojtyla  subsequently the previous head of the Catholic  Church John Paul  II, has been beatified by his successor, the present Pope Benedict XVI. Beatification is the necessary stage in the canonization (sainthood) process. 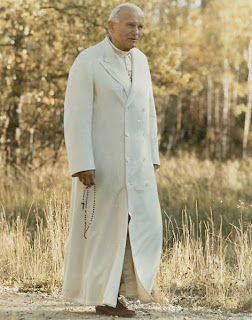 Becoming an orphan at the age of twenty, may have contributed to the decision to enter the path of priesthood thus allowing Karol Wojtyla actively embrace all of humanity as his extended family. This had been clearly apparent in his unprecedented reaching out to the peoples of all ethnic and faith backgrounds through over a hundred pastoral journeys he made to 129 countries – an activity surpassing in magnitude and scope any pontiff in history.

On a more personal level an act, exemplifying his compassion and the sincerity of his mission to embrace all humans as his family, can be seen in his attitude toward his would be assassin Mehmet Ali Ağca. After having recovered from the nearly lethal shooting he visited the prison cell of the man that attempted to kill him, and after having spent some time talking in private, his first official words to the world were ‘Pray for my brother, whom I have sincerely forgiven’.

While still as a Bishop, Karol Wojtyla participated in the Second Vatican Council (an official reform within the Catholic Church), where among his contributions were some of the most historic and influential products of the Council, among them the Decree on Religious Freedom (Lat. Dignitatis Humanae) – where it is declared and emphasized as the official stance of the Church that all persons have a right to religious liberty, a right with its foundation in the essential dignity of each human being.
Becoming the head of the Church certainly facilitated to implement the work he begun as a bishop. This again is marked by unprecedented acts of reaching out and solidarity with other faiths. It seems that in this respect John Paul II made history with every passing year - on the Christian level in his ecumenical work to unite on a common ground all the Christian denominations, and on a broader scale building bridges to other faiths like the pontifex maximus he was intended to be (a term informally adopted by the Catholic Church from ancient Rome, serving as an informal title for Popes – great builder of bridges). The notable acts of this interfaith solidarity were his historical visit and prayer in an Islamic mosque in Syria in 2001, and a similar act during his visit to Jerusalem whereby he was the first pope to visit and pray at the Western Wall – a sacred place of Judaism.

To my surprise however, Buddhism with its unique philosophy of salvation is considered by the Second Vatican Council to be in dissonance with the doctrine our builder of bridges served to implement. John Paul II inevitably adopted an attitude that faithfully reflects the doctrinal status quo of the Second Vatican Council. As a son and servant of the Catholic Church he professed the soteriology which his faith rendered into a conviction – through Christ is the only way to salvation.Hence the kind and declaredly tolerant, yet simultaneously patronizing attitude of the Second Council: ‘The Catholic Church rejects nothing that is true and holy in these [other] religions.’ (Nostra Aetate). This is the attitude which John Paul had, as the Council’s co-author and representative, consequently and inevitably embodied.

Below are relevant excerpts from his ‘Crossing the Threshold of Hope’ illustrating the core dissonance over the doctrinal contrast of salvation between Christianity and Buddhism – a dissonance declared existent by the authors of the Second Vatican Council.

All of the questions raised by the Second Vatican Council are reducible, finally, to this theme [soteriology]. Nevertheless, both the Buddhist tradition and the methods deriving from it have an almost exclusively negative soteriology […] in the conviction that it [the world] is only a source of suffering for man and that he therefore must break away from it […] The fullness of such a detachment is not union with God, but what is called Nirvana, a state of perfect indifference with regard to the world. (John Paul II Crossing the Threshold of Hope, 1994)

[in Christianity] It is in the world that man meets God. Therefore he does not need to attain such an absolute detachment […] The Church is guided by the faith that God the Creator wants to save all humankind in Jesus Christ, the only mediator between God and man, inasmuch as He is the Redeemer of all humankind. […] Buddhism is in large measure an ‘atheistic’ system. (John Paul II Crossing the Threshold of Hope, 1994)

The consistently respectful, tolerant yet ultimately patronizing attitude, of the Second Vatican Council is echoed in this homily addressed to the people of Thailand:Your Cultural heritage as Thai people is intimately linked to the indigenous Buddhist tradition, which provides a fertile terrain for the seed of God’s word, proclaimed by Jesus Christ to take root and grow. In the practice of Buddhism can be discovered a noble tendency to strive to separate oneself from ‘earthly wisdom’, in order to discover and achieve an interior purification and liberation. This aim is pursued through prayer and meditation, coupled with the practice of moral virtue. As the Second Vatican Council so clearly pointed out, the Church looks with sincere respect upon the religious wisdom contained in non-Christian traditions and rejects nothing that is holy and true in them. (John Paul II, Homily of the Mass for Peace in the World)

It appears from the compassionate, devoted to humanity and radiating with love yet somewhat conservative (i.e. faithful to the Council’s doctrine) attitude of John Paul II that the great builder of bridges is only as good as the guild whose engineering endeavors he is implementing.
In The Roman Triptych he writes ‘Non omnis moriar’ (not all of me will die). Indeed it is up to us to continue and improve upon the art of bridge building.