The story below was written for the New Lotus magazine (at Buddhistdoor International). An attempt at Buddhist fiction: Puss In Boots meets Alice in Wonderland meets Saṃsāra. Needless to say, a condition to fully appreciate the metaphors used therein require some familiarity with Buddhist philosophy.

Felis loved his lazy afternoon naps by the front door, despite the mysterious recurring dream they offered each time. Those naps were the culminating point to the morning routine spent chasing geckos around the house and climbing the living room curtains each time he had the mischievous impulse to do so, and Alice happened not to be looking. Alice was the most caring and loving owner a cat could ask for, but she certainly was careful not to spoil her pet and let him run wild and do as he pleased. This in part was the condition Alice's parents insisted on: "Darling, remember that having a pet means plenty of responsibility. So it would be good for everyone if you made sure the little kitty behaves."

Nausea had always been the cue upon which Felis would "wake up" within his notorious lucid dream. In fact it was quite unbearable nausea, induced by dizziness. It would then soon become apparent that Alice is holding him close, pressed to her chest, and she herself is strapped to a seat in a gigantic merry-go-round situated at the Luna Park which has been seasonally erected in front of their suburban house. The long arms of this mechanical contraption were always decorated with tacky multicolored lights which blinked to the rhythm of a popular nursery rhyme blasting out of the large speakers attached to the ride’s main column. "She must have smuggled me in, under her sweater" - Felis would realize each time, since pets are not allowed on the grounds of the Luna Park. "It's okay Felis, don't be so nervous - this is supposed to be fun!" - Alice would in vain attempt to reassure her little whiskered friend as he clutched anxiously to her arm with claws tearing the sweater's fabric and scratching her skin. 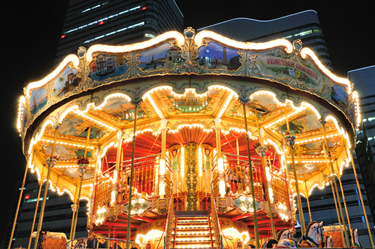 Aside from the extremely unpleasant predicament of being helplessly spun around on this enormous carousel - it appeared very large to this little kitty - the noise of other passengers’ cries consisting of grotesque combinations of hysterical laughter and desperate screams of horror, was quite unsettling. To top this off, this disturbing mixture of cries and jeer was occasionally accented with sounds of painful convulsions of regurgitation - unsurprising consequence of the ride-induced "sea sickness". "Mheeeoowgrr" - was Felis' response to the surrounding human cries as he buried his fluffy head within the folds of Alice’s jumper. "I'm sorry darling - I wasn't thinking when I took you on this ride" - Alice would reply, realizing that her beloved pet is actually terrified, and not just being obnoxious.

Things worsened as it started to become obvious to Felis that the ride wasn’t going to end at all - it just continued on, and on. People's ghostly cries rang like delirious mantras uttered by a group of helpless lunatics - "Luna Park!” flashed through Felis' little, witty head, but the sight of his mistress pale face brought him back at once to sobriety again. The sickly appearance of Alice's fixed and wide-eyed stare, framed by an unnatural smile overshadowed by pain, alarmed Felis. This unmoved, mask-like expression of his dear owner failed to obscure the imminent danger and urgency of the situation, as Felis' ears, pressed against Alice’s chest, were suddenly flooded with the desperate hammering of her heart. As the frequency of her heartbeats intensified, it seemed that her chest would burst open any second. It was at that moment that Alice would start singing the lyrics of the ride’s nursery rhyme theme. She did that whilst maintaining her unmoved and comatose gaze and unnatural grin:

“Ring around the rosie,
Pockets full of posies,
A-choo, a-choo,
We all fall down”

-"This is a nightmare!" realized Felis, and looked nervously around the Luna Park, which is no easy feat when done from a spinning carousel, since the whole world rushes past like a blurred and phantasmagorical vision. There was no one to be seen! The entire park was completely deserted except for the people trapped on this spinning, monstrous contraption."Can't anyone see what's going on?! This is unbearable!" were the last thoughts Felis had before freeing himself from Alice's embrace and leaping off the carousel seat. Despite being flung out like a projectile out of a slingshot – his little furry body somersaulting through the air, he managed to land on all fours unscathed.

Only then, once on the ground, shortly after his dizziness subsided, the nausea finally vanished for the first time since entering his lucid dream. Felis became aware of the surrounding stillness. It was quite overwhelming, and offered a clear perspective of the entire Luna Park. This serene repose was suddenly terminated by a sharp and foul smell of vomit painfully piercing Felis’ sensitive nostrils – it reminded him why he was here, on the ground. Compelled to stop the mechanism, he was relieved to finally locate the main switch protruding out of the carousel’s column. Knowing what remains to be done – Felis at this point of the dream would flick the switch and wake up before seeing the carousel slow down to a halt.

Waking up this time, he was pleasantly greeted by the delicate touch of Sun’s mid afternoon rays. Opening one of his eyes lazily he noticed a gecko on the door frame stealthily following a giddily fluttering moth. Felis leaped toward the door frame, but the agile lizard swiftly evaded this sudden feline pounce and wriggled outside onto the grass. After his surreal, yet reinvigorating nap Felis felt ready for a few more playful laps around the house in chase of the amusingly frightened geckos. Having ventured deep into the backyard bushes in pursuit of the swift reptile, Felis was too far to hear Alice’s soft voice singing, as she was busy cutting some flowers blooming in the front yard:

“Ring around the rosie,
Pockets full of posies,
A-choo, a-choo,
We all fall down”.

What a remarkable piece of writing with multiple layers of meaning. This reads as a living text that is still yet to be understood even after it has been read several times, each reading a new experience of the true hidden truth contained within...how very Buddhist lol. Thank u for sharing this.

Thanks:)
I actually really enjoyed writing this, since the whole metaphorical setting gave direction to the writing process.