Three observations. A few months ago, whilst sitting in a park in Sherwood on the bank of the Brisbane river I noticed something peculiar. The sun was quite low at this time of the day - about 15 degrees above the horizon on the other side of the river. A group of  Noisy Miners (birds - Manorina melanocephala) were gathered on the ground between where I was sitting, and the bank of the river, engaged in a peculiar hunting activity.

This is unusual for those birds, from my experience. They trotted around on the ground, every now and then flying up for a second only to land again. This phenomenon evoked my curiosity - what are they doing? They were hunting for moths and other insects of course, which from a bird's ground perspective were clearly visible against the dark background of the trees, and illuminated by the setting Sun. Hence this phenomenon - particular behavior of the Noisy Miners was contingent on the location (dim depths of a park on one side, and an open river bank on the other clearing the way for the rays of the setting Sun) and the time of the day. What finally confirmed my hypothesis was the fact that the birds always took flight in the direction of the park i.e. with the Sun - never in the direction of the Sun - toward the river's bank.

* * *
I observed something of similar nature today. I often track the Moon's path accross the sky from my front porch, as I appear there intermittantly every hour or so. There's a large tree in front of my house, which obscures a fair share of the Moon's path from the perspective of my porch. There is however one clearing among the branches, where the Moon appears for a short while, snugly framed by the little window in the monolithic thicket of the tree. I noticed today that although there would be sufficient room to construct a web anywhere among the tree's branches, a Golden Orb Spider has spread his silky net in that very clearing. 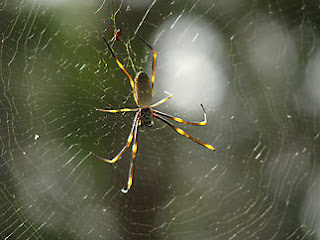 We all know that moths are attracted to light - so the point is that the phenomenon of this spider appearing in that exact spot is contingent on the clearing, the Moon appearing there and the swarms of moths inevitably flying in that direction from the low and misty thickets of my front garden. The clearing, the seasonal location of the Moon (and it's phasal brightness) are only temporary, just as is the phenomenon of  "the spider in the tree's window".

* * *
The final, and equally contingent occurance which ties the previous observations is "the phenomenon of this post", since as I saw the spider today, the memory of the birds hunting by the river came to mind - and hence a substantial topic to write about.

Email ThisBlogThis!Share to TwitterShare to FacebookShare to Pinterest
Labels: Nature

I guess spiders enjoy the beauty of the moon as well - perhaps! Animals after all are more complex than we give them credit for...